I consider myself fortunate that the previous two projects I worked on (the BT Web21C Portal and Mojo) were Rails-based (actually it wan’t just luck in the former case, as I had a part in selecting the framework). I love the expressiveness and flexibility of the Ruby language, the power and relative simplicity of the Rails framework, and the all-round awesomeness of tools like RSpec and Capistrano, and I don’t particularly relish the thought of going back to Java (although I’m told that Spring is much nicer than last time I used it).

At our recent release planning session, I was assigned to a new project, which involves (among other things) exposing a CLI-based configuration interface as a web service. In our initial discussions, the four of us more-or-less agreed on a few initial decisions:

Since we’d all been working on Rails projects when the new team was formed, we assumed that this wouldn’t be a particularly contentious route to go down, but unfortunately our director/architect/boss didn’t see things quite the same way. He had two main objections:

I think the first point’s easier to address, as I’d argue it’s based on a misunderstanding: Rails isn’t really anything to do with GUIs, but is a framework for creating MVC web applications. Virtually all the heavy lifting Rails takes care of is in the controller and model areas, with the creation of the actual visible GUI being left to the developer to take care of with the usual mix of HTML, CSS and Javascript. The only thing Rails adds is the ability to insert dynamic content using ERB – similar to the role of JSP in Java EE.

A RESTful web service is, to all intents and purposes, the same as a normal web application, but (potentially) without the HTML. All the power that Rails brings to web application development is also harnessed when creating RESTful services.

The second point represents a much more fundamental strategy choice. If the company makes the decision that all development is going to use Java (the language as well as the platform), then we inevitably lose the flexibility to choose what may appear (in a local context) to be the right tool for the job. Personally I think that would be a shortsighted and ill-informed decision: if that were the strategy, we’d presumably all still be developing in C, or COBOL, or Assembler. Or we’d have gone bust. But then I’m not an architect (incidentally, according to Peter Gillard-Moss, that’s reason number 10 why I don’t deserve to be fired), so what do I know?

However, if Ruby is considered an acceptable technology choice for “normal” web applications, we’ll still need people with appropriate skills to support those, so the problem doesn’t go away. I suspect even for a Java specialist, supporting a well-written Rails application with good test coverage is probably easier than supporting some of the spaghetti-coded Java I’ve seen.

Anyway, our arguments obviously weren’t totally unconvincing, because we were given a couple of weeks to show what we could produce before getting a final decision. That time runs out on Monday, so if I’m unnaturally grumpy after that it’ll be because we’ve been told to chuck all our work so far away and start from scratch in Java. Or possibly FORTRAN.

Update, 16 June Well we made our case, and we get to stick with Rails. Celebration all round! 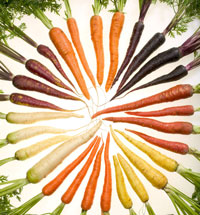 Traditional approaches to motivation tend to fall into one of two camps: the carrot (“do this and you’ll be rewarded”) or the stick (“do this or you’ll suffer the consequences”).

I guess I’m fortunate to work for a company (and in a country) where by and large there isn’t a culture of firing people who don’t meet performance targets – instead we have a system where an ever-increasing proportion of people’s pay packet is made up of a performance-related bonus, rather than a fixed salary.

So, how do you go about getting your bonus each quarter? Simple: just meet your agreed targets.

Of course, nothing in a large corporation can ever be that simple, so in practice there’s a complex tiered system of company, business unit, programme, project, team and individual targets, which are combined in a magic spreadsheet to generate how much bonus everyone gets. Each of these targets, and the performance against them, has to be agreed, monitored, quantified, audited and levelled. At each stage politics comes into play. Those that enjoy playing systems try to set targets they know they can achieve. People concentrate on meeting the letter of the objectives, possibly to the detriment of other activities, like helping colleagues or making process improvements.

Now step away from this corporate dystopia for a moment, into the world of Agile Software Development. A world where we value Individuals and interactions over processes and tools, and Responding to change over following a plan. A world where we strive to build projects around motivated individuals, give them the environment and support they need, and trust them to get the job done. Where working software is the primary measure of progress. Where at regular intervals, the team reflects on how to become more effective, then tunes and adjusts its behavior accordingly. Where the self-organising team, accountable directly to it customer or product owner, is responsible for its own delivery and processes.

Now, when agile teams in large organisations are forced to jump through the externally-imposed hoops of objectives, development action plans and post-implementation reviews (which add little visible benefit and take up time that could be spent delivering business value), is it any wonder that the carrot of performance-related pay feels like it’s more of a punishment than an incentive?

This is what happens when you take an intelligent, technical, idealistic, web-loving software geek and force him to spend 12-hour-plus days locked in an intensive, corporate, jargon-driven, artificially-competitive workshop.

Incidentally, a Google search for all lies maggots on toast currently returns Paul’s tweet above the Wikipedia page for the character the words come from.

Yesterday I was lucky enough to get the chance to attend a talk/workshop on TiddlyWiki, presented by its creator Jeremy Ruston, with quality supporting acts from JP and Doc Searls. Jeremy has just joined BT as Head of Open Source Innovation, which is pretty cool in itself.

One of the comments he made that particularly struck me was to the effect that a piece of software is a living thing, but is parasitic, requiring a ‘geek host’ to live on. Much of the value of software isn’t what it does, but what it can potentially do. Once you separate the software from its geek, it starts to die, because it can no longer adapt to changes in its environment.

I think this is something that we’re losing in the world of corporate IT.

END_OF_DOCUMENT_TOKEN_TO_BE_REPLACED

A recent article in the New York Times describes the issues of introducing ‘The Toyota Way’ to non-Japanese factories.